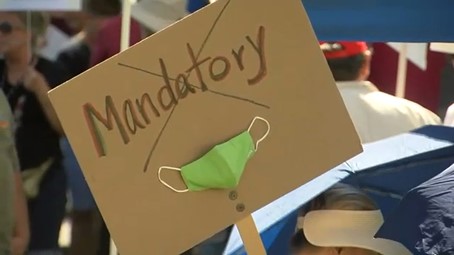 How was the Biden Administration able to flip the switch on COVID Mania and turn off the Safety Regime virtually overnight, after 15 months of a ruthless propaganda and fear campaign claiming that America was in the midst of a perpetual pandemic of endless death and destruction? Luckily for Team Biden, the current White House/ are/ beneficiaries of Democrat, or D.C. insider privilege. And because they/ are/ part of the insider’s club, they/ have the ability to control and manipulate/ the power centers in D.C. at a moment’s notice. To make sense of this rapid, perplexing change of events, you have to understand/ how our institutions in Washington, D.C. actually work.

It’s understandable for the average American citizen to have a difficult time grasping how the CDC and other Government Health institutions/ have gone from projecting/ a “sense of impending doom” to “your health is in your hands” in a matter of days.

Understanding/ the real formatting of the D.C. beltway/ means/ being familiar with the de facto power structure in Washington, and being able to identify/ the people who are actually in charge. Contrary to what is being reported in the press, political appointees like CDC Director Rochelle Walensky and her colleagues on the same hierarchical level/ are not in fact in charge of much at all. Sure, Dr. Walensky/ may have/ a powerful, respected title and some lofty credentials, but that doesn’t mean she has the independent authority to make executive-level decisions. She and her colleagues were appointed to these positions with the understanding that they would dutifully take orders from the White House, no questions asked. Dr. Walensky and others in Government Health were vetted prior to their appointments to make sure that they would be loyal to the ‘real’ power structure in D.C. The powerful individuals in town are policy officials who work directly with the White House, and not at CDC headquarters in Atlanta. Had she publicly dissented from the White House talking points, Walensky would be sent packing the next day. She and her colleagues choose to partake in this system because embracing its practices offers tremendous upside and prestige to their careers.

Now, the somewhat level-headed individuals in the Biden Administration have been seeking a way out of COVID Mania for quite some time. While the power grabs related to “the pandemic” have helped the people in charge accumulate power (particularly maniacal state governors) and install an authoritarian Safety Regime, the pandemic policies/ have also manifested/ several crises. The Biden Administration/ is dealing with countless domestic and international upheavals, in addition to a sinking economy, among many other impending bubbles and catastrophes. They/ needed/ a way out as soon as humanly possible. COVID Mania/ had/ so many residual effects that it began to threaten/ the integrity of the entire system. They/ needed/ an exit strategy, so they/ simply asserted/ their insider privilege, moved/ the political appointees and the federal bureaucracy into order, and switched off COVID Mania like it was no big deal.

Could Donald Trump/ have pulled this off in the same way? I’m not so sure. It’s important to understand/ [how Washington/ works (when someone (who threatens/ the administrative state)/ comes into town, as opposed to someone (who is supported by the federal bureaucracy))].

The federal bureaucracy/ is overwhelmingly liberal and conformist when it/ comes to supporting/ the power centers in Washington. In the 2016 elections, 95 percent of political donations/ went to Hillary Clinton, who, like Joe Biden, is very much the ultimate D.C. insider.

When an insider White House like the Biden Administration/ is in charge of the executive branch, the civil service/ acts in solidarity with the administration. They/ rightly do not perceive/ the Biden Administration as a threat to The System. When an outsider like Donald Trump/ comes into town, the civil service/ makes it their mission to make/ the outsider’s job as difficult as possible. From 2016-2020, we/ saw/ the extremes of this phenomenon on display, as the federal bureaucracy/ made it their mission to not only undermine/ the president, but to attempt to remove/ him from office by any means possible.

If a term two Trump Administration/ had decided to make/ this sudden move, it/ would almost have certainly been met with complete outrage, a federal bureaucracy in complete revolt, mass resignations, the corporate press// accusing/ the president of committing/ mass murder, and woke/ corporations perhaps making mask and vaccine requirements even more stringent upon entry.

Would Trump/ have been able to eventually curb/ Anthony Fauci’s daily adversarial TV appearances? That/ remains/ unclear. Yet observe how expeditiously the Biden Administration/ has been able to tame/ the rabid animal in the spotlight-seeking Fauci, who has fallen in line[1] with the talking points (regarding masks and school openings). Make no mistake, a dissenting Fauci/ will be thrown under the bus multiple times if he/ acts out of line, and the political scientist in the NIAID chief/ is careful not to overstep/ his portfolio.

Team Biden/ was able to pull the plug on[2] COVID Mania so swiftly because they/ have/ the ability (to control/ the federal bureaucracy), in addition to having/ the support of the power brokers in D.C. and a cheerleading corporate press. Team Biden/ is/ a beneficiary of insider privilege, and they/ used/ it to end/ COVID Mania in a moment’s notice.

Reprinted with permission from The Dossier.